Being on the board changed me. Over time it made me ‘walk the walk’ a lot more,” says Linda Brownstein.

A crackling and candid conversation with Linda leads me to believe that she was likely walking the walk in many ways before she joined the NatureBridge Board of Directors in 1993, though she certainly underwent a personal transformation.

“It changed how I live my daily life — supporting other environmental causes, recycling, composting, organic farming…some of the most impactful things I've done have really been from NatureBridge.”

Now a highly valued and respected Board Emeritus, Linda helped NatureBridge weather some of the organization’s most difficult crises through the years. She turned significant vision into reality and created the space for new policy ideation and strategic planning. When she left the board in 2005, people gifted her precious artwork and poignant mementos that highlighted her achievements as Board Chair.

And none of this would have happened if she had been sitting one row back on a five-hour flight from San Francisco to New York.

“It changed how I live my daily life — supporting other environmental causes, recycling, composting, organic farming…some of the most impactful things I've done have really been from NatureBridge.”
Linda

It’s easy to write off this random, fortuitous moment as common, and perhaps it is – we have all experienced them — if he hadn’t walked into the store that particular day, we wouldn’t be married; because she was 11 seconds too late to catch the train, she met her future long-term employer — so on and so on. Those chance moments feel immensely special, but they are only made special by action. Countless serendipitous opportunities arise for us every day; Linda’s has real potency because of what she did with it.

On that flight to New York from San Francisco in 1994, she sat next to Garry Mitchell, then President of NatureBridge (then Yosemite National Institutes). The two strangers struck up a conversation.

“Garry was trying to bring diversity to this all-white, all-male board at this organization I’d never heard of called Yosemite National Institutes,” says Linda Brownstein. “After talking with me, he figured, ‘She is a good fit.’”

She may have been a good fit, but Linda wasn’t ready to join the board of an organization she’d just encountered for the first time. At the time, Linda was Senior Vice President of the education division at Atari, the global electronic game company famous for creating Pong and Pac-Man. Prior to working at Atari, Linda had been a teacher and worked in the investment management business for five years.

“So Garry figures: business lady, cares about education, passionate about the environment — this works,” says Linda. “When I do something, it’s very hard for me to do it halfway, so when I say yes, I mean it. I’m only going to do it if I’m ready to commit 100%.”

“I also told him I had no interest in being the first woman on an all-male board,” she chuckles.

She agreed to stay in touch with him and talk informally about NatureBridge. That turned into a monthly in-person lunch for three years where Linda would advise him on various issues relating to the organization. All the while, Garry worked behind the scenes to build a group of strong potential female board members.

“Eventually, he convinced all of us to come on together, these three incredible women and myself,” says Linda. “We all joined at the same time because none of us wanted to be the first and only woman on the board.”

Linda was joined by former Olympian and the “most powerful woman in sports” Anita DeFranz; organizer and author of LA 2000, dean at the University of Southern California and former president of the Natural History Museum of Los Angeles Jane Pisano; and Jill Sideman, member of the advisory board at National Geographic and former chair of the endowment committee at the National Association for Women in Science.

Linda’s years on the board were marked by struggle and resilience. When I asked her about her greatest challenges — she presided over the board as Chair during the 1997 flood in Yosemite and government shutdowns of the parks that housed NatureBridge’s campuses — she was more focused on what grew out of them.

“One challenge was certainly Mother Nature, and that turned into a financial challenge for us,” she says. “We held a brainstorming session at the Headlands Institute (now NatureBridge’s Golden Gate National Recreation Area campus) with all the senior management team, and we literally went line item by line item through the budget and discussed every single part of the organization. Sometimes it felt like it was cutting into your heart to do what we had to do.”

A week later, the board met to review the recommendations of that brainstorming session. As programs were cut and layoffs were considered, one mantra began to crystallize that would stay with Linda throughout her board chair tenure and beyond:

The play on James Carville’s famous “It’s the economy, stupid” line from the 1992 presidential election came from Karen Collins, a board member who was also Associate Superintendent of California State Parks.

Another challenge was the expansion of NatureBridge’s programs to more diverse communities, where Linda played a pivotal role.

“Just like the board was mostly white, the students we were serving were mostly white. That didn’t reflect California and Washington, which were dramatically changing in terms of demographics.”

Adjusting to service the needs of those rapidly changing populations required patience and experimentation. NatureBridge acquired funding to run a program called Teen Environmental Action Mentorship (TEAM), which brought students from historically marginalized communities in the Bay Area to the Golden Gate campus for an environmental education series.

“From there, with Ty Cobb as CEO, we built the corporate competence to begin to raise money. That enabled us to start the Diversity Initiative where we were then able to scholarship kids to bring them to the campuses.”

A third challenge was creating NatureBridge’s strategic plan; a carefully crafted vision that took into account everything from potential new funding to core learning principles, with the goal of outlining the financial, programmatic and structural future of the organization.

“It took nine months because we wanted buy-in from — and I mean this literally — every single person in the organization,” she says. “By the time we’d been through all the iterations, it was very easy to pass since everyone was already on board.”

After the strategic plan was passed, Linda arranged with Ty to bring in a Harvard Community Partners team to perform an organization-wide governance study. These three volunteer consultants — Allan Prager, Phil Lamoreaux and Dorinda Nyberg — made recommendations that created a governance structure and policies that would take the organization forward in powerful ways. All three were so inspired by the work of NatureBridge that they assumed roles as directors and advisors for many years.

Linda retired from the board in 2005, leaving an immediate and deeply felt legacy. As parting gifts, she received a print of the famous Earthrise photograph from Bill Anders, himself, as well as a going away dinner at the Golden Gate campus in the Marin Headlands. At that dinner,  friend and staff member Lisa Hale gave Linda a set of custom bandanas that displayed her accomplishments as Board Chair in the form of a mind map — an educational tool often used in NatureBridge programs.

“I think mind maps are brilliant. They make sense to kids of every ability and every background. Ever since I was introduced to them, I just loved mind maps. So that was special to see all my achievements made into one like that,” says Linda. 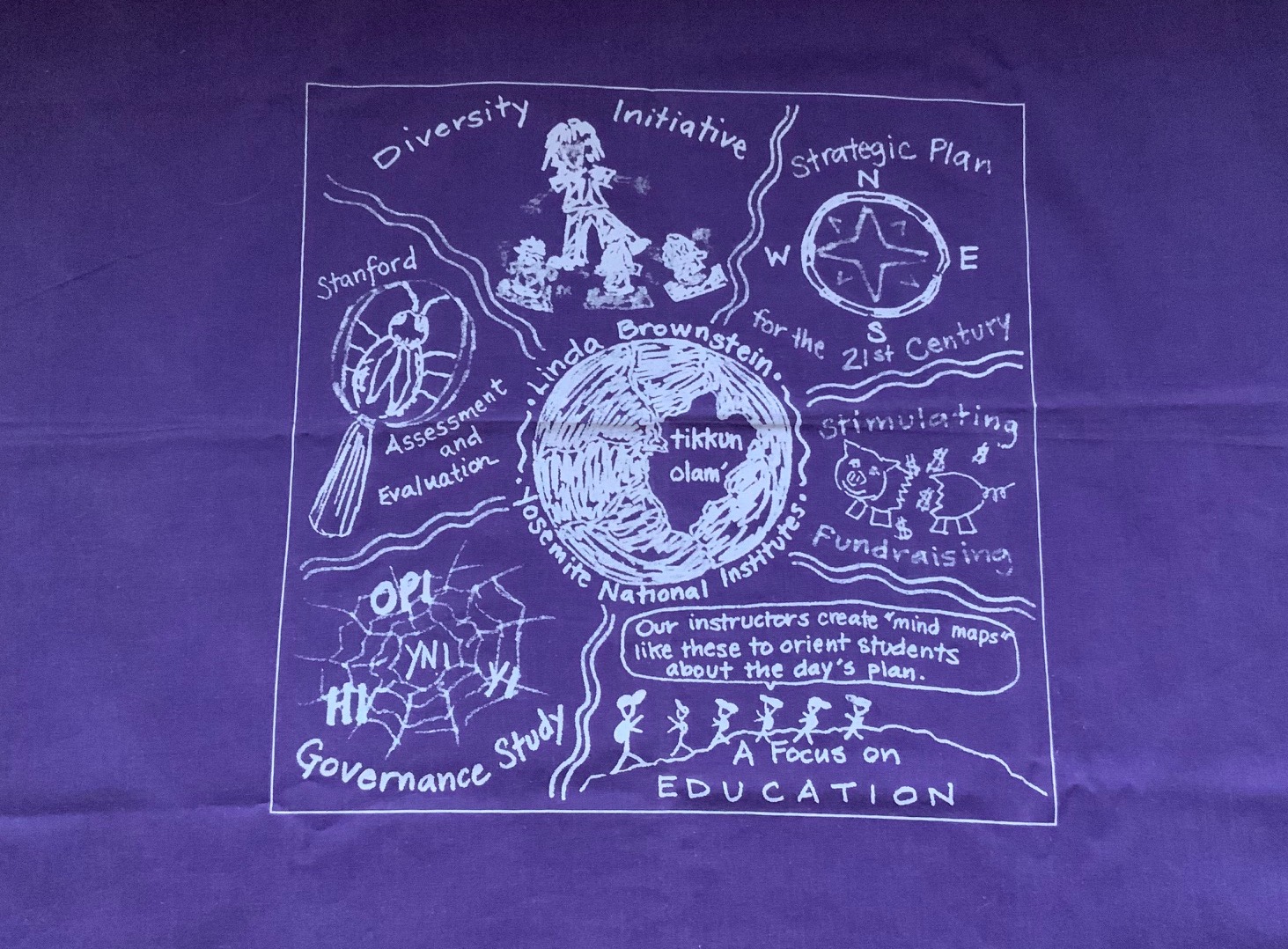 To say Linda was successful as Board Chair is vastly understating her tenure. Crafting the strategic plan, helping guide NatureBridge through a catastrophic flood and government shutdowns, spearheading the Diversity Initiative — the accomplishments barely fit on the bandana. They are made all the more impressive because of how accomplished she was outside of her time with NatureBridge.

Linda chaired the Israel and Overseas committee for the Jewish Community Federation in the Bay Area and in her role at Atari, led the charge to introduce schools to micro-computers: computers for personal use that run on a single chip microprocessor. In other words, she helped ensure that kids could use this burgeoning technology in classrooms, a monumental step in advancing computer literacy for a generation.

“I’ve also built money management companies…and then later I was in venture capital. But I don't think I ever received more selfless gratification out of any work that I did than from what I did for NatureBridge and the Jewish Community Federation in the Bay Area,” says Linda.

It’s easy to see how Linda’s efforts in the past laid the foundation for the present.

Where once microcomputers were a revolutionary technology determined to elevate classrooms to the higher levels of education, they are now so ubiquitous in students’ lives (and pockets) that they’re sometimes considered distractions. A Diversity Initiative constructed by years of study and effort to better represent the population NatureBridge served has now been subsumed into a much broader point of view on equity and inclusion. NatureBridge’s Board of Directors is now made up of a majority of women, where 30 years ago there were none. What was once trailblazing could now be taken for granted by those not old enough to see the path behind them.

How does it feel for Linda to be living in the future that her past is responsible for co-creating?

“I have a very close friend who says about our children, ‘we give them roots and wings, and then we let them fly.’ And I sort of feel that way about the Diversity Initiative and all the work that I did,” says Linda.

“I gave it roots and wings and now it is flying. There's no greater sense of satisfaction. NatureBridge has had one terrific board after another, both nationally and at the local level. They have committed people who are of real substance, who care about the mission of the organization. So how could I feel anything but tremendous pride that they've gone on to do bigger and better things than we did? We built the foundation and they couldn't have done what they did without the foundation and I acknowledge that, but I'm so proud that the organization is thriving and excelling to even greater heights.”

#50StoriesFor50Years Board Spotlight Equity, Inclusion & Diversity
Check out these other

Gratitude for Land and Peoples

NatureBridge recognizes and is grateful for the land upon which we are privileged to run our programs and the indigenous peoples who continue to care for and have stewarded these places for thousands of years.

As a physician in Washington, DC, Laura knows all about the importance of the physical and mental health benefits of spending time outdoors. That’s why she has been on the board for our Mid-Atlantic Region (MARE) campus located in Prince William Forest for the last six years.

Mary visited us as a student back in 1977 when NatureBridge was known as the Yosemite Institute. Nearly 20 years later, Mary completed the cycle when she returned as a teacher, bringing her first group of eighth graders to our Yosemite campus.