From the shores of the coast, through old-growth forests to alpine peaks, Olympic National Park (ONP) in Washington state presents students with the unique opportunity to investigate and understand complex ecosystems in an example of a temperate rainforest. Students learn about impacts of altitude on forest systems, environmental restoration and watershed health.

Olympic National Park is on the ancestral and present day homelands of the Lower Elwha Klallam, Jamestown S'Klallam, Makah, Quinault, Quileute, Skokomish, Hoh and the Queets tribes. They are the original caretakers of this land and have lived here for over 8,000 years!

A (very brief) Timeline of ONP

NatureBridge’s Olympic campus is located on the shores of the glacially carved Lake Crescent on Barnes Point, surrounded by beautiful forest.

On Barnes Point you can see many different trees and plants including Bigleaf maple, Douglas fir and Oregon grape. Barnes Point is also home to a lot of wildlife including black-tailed deer, Douglas squirrel and bald eagles.

Lake Crescent was formed by glaciers and a landslide. The lake is oligotrophic, meaning it has low levels of plant nutrients and abundant oxygen in deeper parts of the lake. This lake supports very little biodiversity, but it's super clear. Some animal species, like the Beardslee and Crescenti trout, are endemic to Lake Crescent - these trout live nowhere else on Earth!

NatureBridge developed an entire virtual lesson on Sense of Place in Olympic National Park! Follow in the footsteps of students who have learned with us on this Guided Exploration, put together by NatureBridge educators. Please note Prezi does not work on cell phones or tablets. 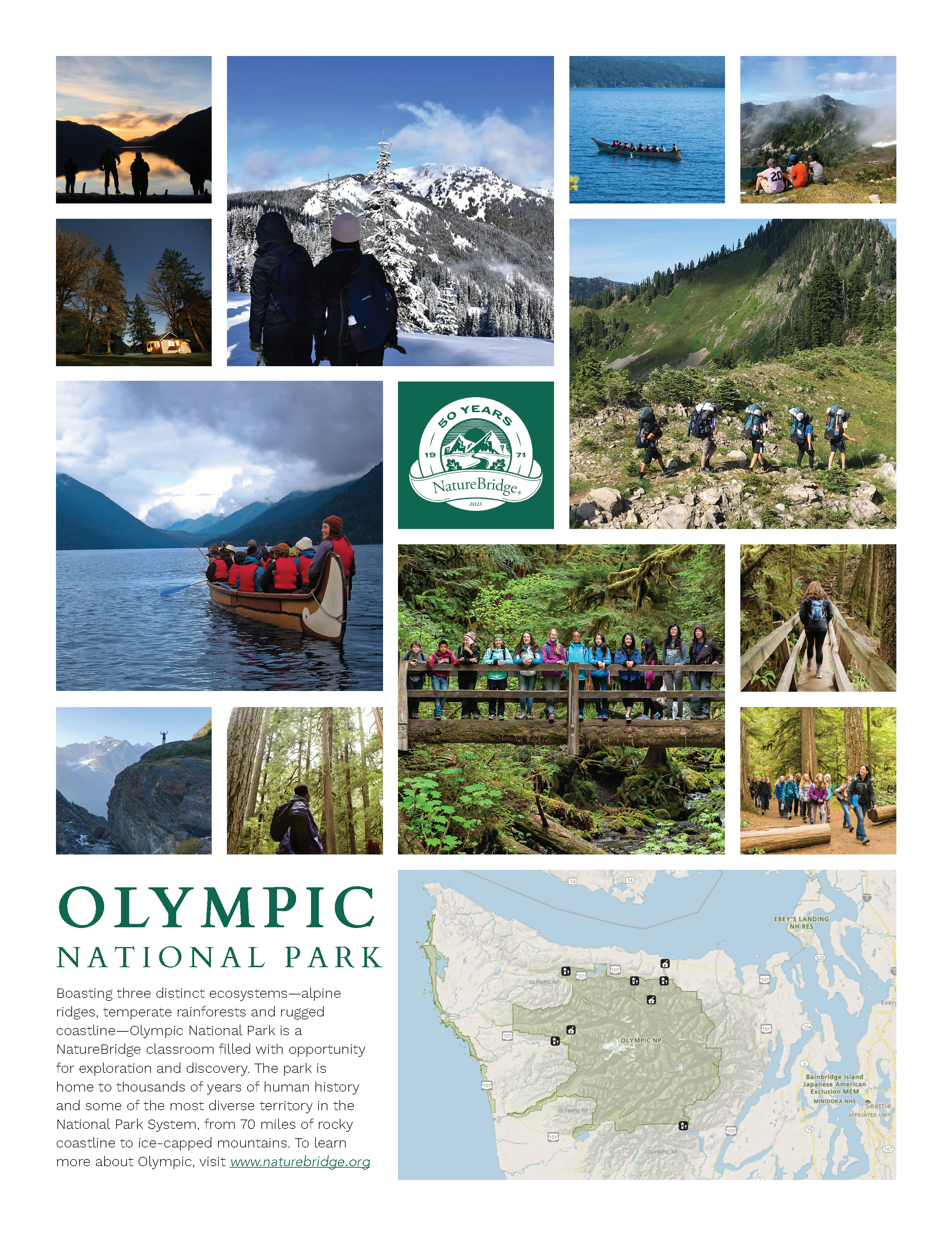 #50StoriesFor50Years Olympic
Check out these other

The Baxter Award Part I: The Dream Imagined

“You know, there's the dream, and then there's reality,” says Kristina. “To take that dream and that concept, and then have to go and really fulfill it — that’s a whole other challenge. An amazing challenge that Matt would pump his fist about.”

To all who knew him, Matt Baxter was a passionate, kind, gentle, funny and ravenously adventurous person. The former NatureBridge educator, who died in a climbing accident in Yosemite in April 1996, inspired children and adults alike throughout his life. It is no surprise that he continues to inspire people after his death.

On the eve of April 16, 2012, Vanessa Morel busied herself with last-minute preparations in Prince William Forest Park; in less than 24 hours, the first group of school children would be visiting for NatureBridge’s inaugural program in Prince William.

“I was like a mother hen that just couldn't settle,” says Vanessa, the Founder and Principal of NextGen Conservation who was NatureBridge’s first Washington D.C. Director at the time. “It was time for me to go home and leave it in the hands of the overnight staff, but I almost couldn't leave because I just felt this awesome responsibility. Would it all work out?”

Paula Bush and Dreaming a Better World with NatureBridge

As a science teacher, Paula Bush has long been an advocate for hands-on, out-of-the-classroom opportunities. For high school students, testing can be a huge obstacle. At NatureBridge, Paula was always thrilled that students were granted the opportunity to be curious without being tested. “We’ve killed curiosity in kids!” she said. “NatureBridge is important because it’s not about book knowledge: It’s experiential. You walk on a trail and all of a sudden learning is much more alive.” Most important was the continuity Paula found at NatureBridge: Tangible lessons that she could reinforce back in the students’ community about nature, being outdoors, caring for the earth and empowering leadership.