Don Rees & the Inception of NatureBridge

This year, we celebrate 50 years of providing transformative outdoor experiences to students. Fifty years of experiences in our national parks that have inspired kids to become scientists, policymakers, park rangers, artists, teachers, community leaders and advocates for the natural world. Fifty years of igniting self-discovery and inspiring stewardship for more than 1.5 million kids—a milestone that began in Yosemite National Park with one person and an idea.

That person was high school math teacher Donald Rees. His idea? A week-long trip to Yosemite National Park for his students at Laguna Blanca School in Santa Barbara. The year was 1971, the cost was $80 per student and the promise was a rewarding and educational experience in Yosemite Valley. That trip inspired the founding of Yosemite Institute—now NatureBridge—and five decades of overnight environmental education in our national parks.

Yosemite Institute was formed in 1971 with Don Rees as the first Executive Director.

Today, Don reflects on the founding of this organization and the impact it has had on 1.5 million students. At the time, could he have imagined that NatureBridge would become the largest education partner of the National Park Service? Could he envision connecting students to the outdoors in not just Yosemite National Park and the Golden Gate National Recreation Area in California but in Olympic National Park in Washington; the Santa Monica Mountains in Southern California; and Prince William Forest Park in Virginia too?

Many friends and colleagues would likely tell you so; believing firmly that Don’s enthusiasm and resourcefulness in the 1970s would be the catalyst for a hands-on learning, outdoor educational program in the park is one that will continue to have a lasting impact on this and future generations.

Don was raised in a middle-class suburb of Los Angeles, but even from a young age he was drawn to nature. He could often be found gazing at the San Gabriel Mountains from atop poplar trees in his backyard. Eventually, his mother was able to rent a mountain cabin in the summer which gave Don the freedom to explore and connect with the outdoors, an experience he remembers fondly.

That passion for being outdoors carried into adult life. When they weren’t in the classroom teaching, Don and his wife Jo Ann, spent the 1960s adventuring, exploring and leading multi-week backpacking excursions through the Sierra Nevada and ski trips to Mammoth, China Peak,Squaw Valley and Europe. One fateful summer, a family vacation to Yosemite National Park included a three-day backpack from Tuolumne Meadows to Yosemite Valley. Don happened across Wayne Merry, director of the Yosemite Mountaineering School (YMS). That moment would take Don back up to Tuolumne for a climbing lesson and then into the offices of the Yosemite Park and Curry Company (YP&CCo).

“Wayne and I discussed a school week of outdoor science, history, rock climbing, hiking, cross-country skiing, etc.,”  Don wrote when reflecting on NatureBridge’s 25th anniversary. “Such a week would not be vacation; it would be serious learning, yet fun, in an outdoor setting.” 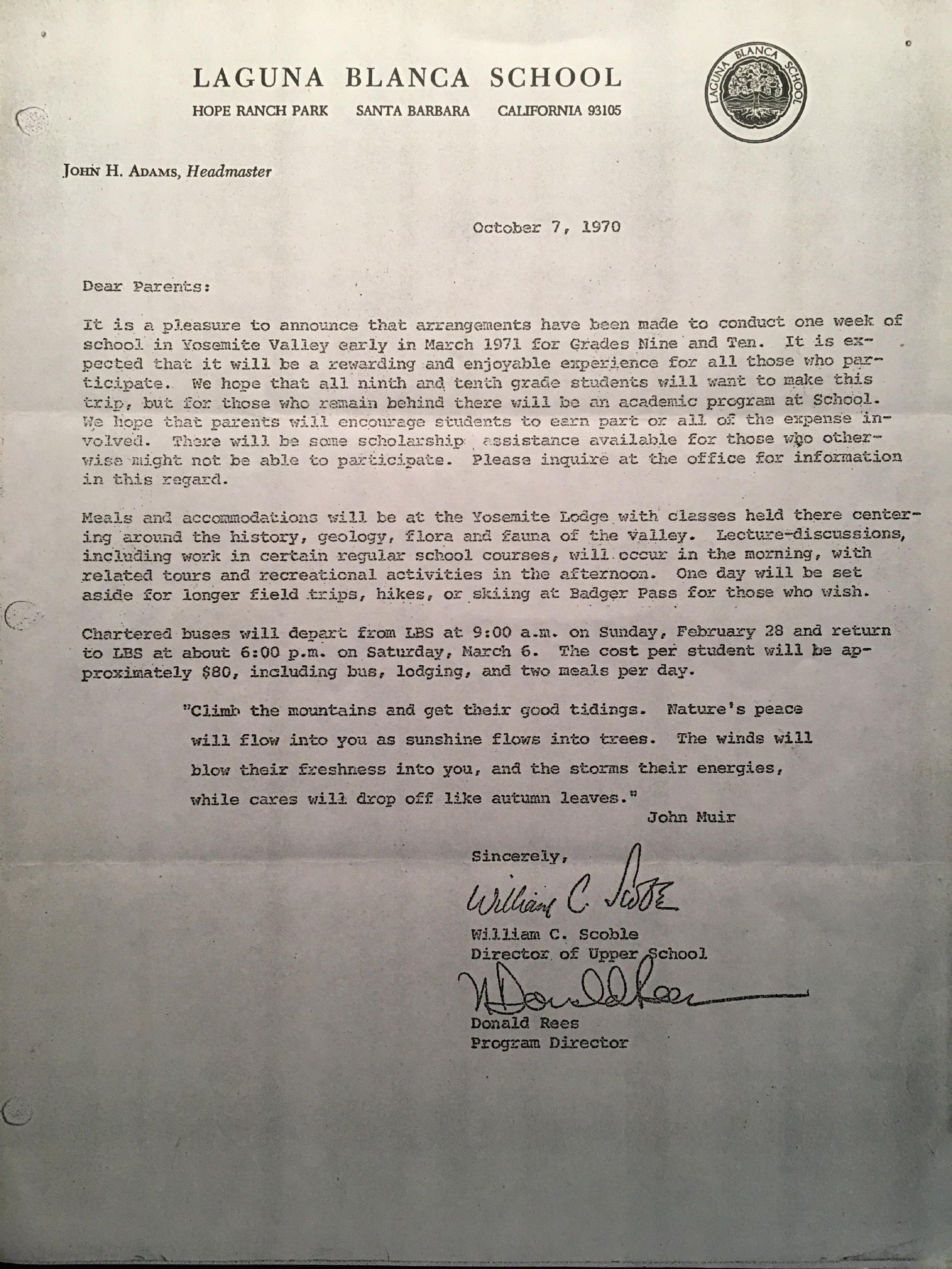 In the spring of 1971, more than 50 ninth and tenth grade students and five teacher chaperones from Laguna Blanca School boarded a charter bus and headed north.

At the time, the National Park Service had just “one and one-half naturalists” and thus, could not spare someone for the program. Don invoked the help of friend Will Neely of Santa Barbara to share insight and knowledge on the flora and fauna of Tuolumne Meadows with the students. Will’s field instruction was a tremendous asset throughout the week. In fact, he was the first and only educator for part of that inaugural year.

The trip was a success. So much so that Don returned to the park that spring and summer, equipped with a curriculum and marketing plan to advocate for his proposal of a permanent program in the park. It took some, or rather much, persistence and coaxing, but in the end, there must have been something about Don’s winning combination of business sense and passion for the outdoors that did the trick. Don was so persistent that the National Park Service once treated the Rees family to a stay in the High Sierra cabins, a gift that Don jokes was likely just to get him out of their hair. In the end, Yosemite Superintendent Lynn Thompson and Deputy Superintendent John Good agreed to his plan and in August of 1971, Yosemite Institute prepared to welcome its first official group to the park.

“I had one year and $20,000 in YP&CCo seed money to make it work,” recalled Don. “How did a high school math teacher from Santa Barbara get in to see the park service, land a meeting with the superintendent and get permission to start a school in a national park? I have no idea,” Don said chuckling as he recalled the inception of the program. “I was 33 years old. [My daughter] Ann says I had energy but that doesn’t explain much!”

For anyone who spends even just a few moments listening to Don reminisce about those early days, it’s no wonder park leaders entrusted him to connect students to nature. Don’s spirit of adventure, fervent love of the outdoors and passion for teaching shine through in each anecdote he recalls.

In the fall of 1971, the Rees family moved from Santa Barbara to Yosemite National Park. And on October 4, 1971, students from the Polytechnic School in Pasadena—where Don had taught math in the early 1960s—arrived for the first official Yosemite Institute program.

Connecting kids to the outdoors was the goal, especially those who weren’t getting all that they needed from the educational system. By the end of that first year, more than 1,500 students and adults had come through Yosemite Institute. Just two years later, Crane Flat—an upper montane environment at elevation of 6,200 feet—became an added base for the program.

It was during the late 1970s that Don began to seek possible new campuses. Bill Whalen, Superintendent of the Golden Gate National Recreation Area, and former deputy superintendent of Yosemite, and Robert Maynard, president of Keystone Resort in Colorado, helped Don establish the second campus at Rodeo Beach in the Marin Headlands. In 1977 the campus was officially opened as the Headlands Institute.

Among what Don considered to be the great success of the YI programs include the “splendid natural sites in which they took place,” the incredible knowledge and passion of the educators and the unique ways in which it impacted all students differently. The unknowns were one of Don’s favorite things.

“I was teaching trigonometry at the school [in those early years], and I remember telling the headmaster we were going to measure Yosemite Falls. Yet, we never did,” he said laughing. “But it didn’t matter. The entire program of just being in the wilderness for a week was so powerful. They returned as different kids.”

Don recalls the thousands of students who revealed learning more about science in just the short time at the Yosemite Institute than they had in parts of their middle and high school careers. Many discovered a newfound passion for the environment and natural sciences, an interest that many took to college studies that included biology and geology. One student in particular that sticks out in his mind was a young man from Pomona Unified School District.

“He was a kid who loved the park, and he knew, after only a week or two, so much about the Valley that he was able to talk to tourists and to visiting families,” said Don. “And somehow I was able to help get him a job in the Valley with the Curry Company. So that’s the thing, you never know the impact [these outdoor programs] will have on each student. Whether it’s the kid staring at the clouds or the boy who ends up working in the national park, it opens up their minds.”

It was my intention from the beginning of Yosemite Institute that all educational programs would be tuition-supported, and that financial grants and donations should support scholarships for students unable to pay the complete tuition.
Don Rees, founder and first executive director of Yosemite Institute

Don never minded the student in the back of the pack staring up at the clouds or yards behind caught up in the tree branches. In fact, that was the whole point.

“Textbooks are good as far as they go but young people need the outdoor experience,” he said.

In celebration of the 50th anniversary of NatureBridge, Don gifted $50,000 to scholarships.

“It was my intention from the beginning of Yosemite Institute that all educational programs would be tuition-supported, and that financial grants and donations should support scholarships for students unable to pay the complete tuition.”

And that tradition carries on today. Don’s generous 50th anniversary gift will provide opportunities for thousands of students in our national parks.

“Who would have thought that a program developed for a school in Santa Barbara would grow into such a large and worthwhile educational opportunity for students and adults? We cannot look far into the future, nor plan far ahead, but we can seize opportunities when they are presented to us… My favorite YI staff quote came from Mr. VInce Kehoe, former YI Program Coordinator, when he was asked by someone writing an account of the Institute and what made the YI so good so quickly. His reply was: ‘Because Donald Rees put our feet to the fire.’”

Five decades later that courage and trust in the unknown has transpired into an awe-inspiring feat—giving more than 1.5 million students the transformative opportunity to explore the outdoors, connect with their peers, discover themselves and develop a lasting relationship with the environment.

Don’s final words on this incredible milestone? A few sage words: We’re all short tenants on this planet, so get out and do something.

Don, we are in awe of your impact. Thank you for believing in the transformative power of connecting kids to the outdoors.

#50StoriesFor50Years Staff Spotlight Yosemite
Check out these other

Back to School with NatureBridge!

We are so excited to welcome students back to NatureBridge campuses for the 2022-23 school year! Over the past few weeks, educators at every campus have been hard at work with training, orientations, preparation work and so much more.

A Journey Towards a More Equitable Organization

Miho Aida, a long-time educator at our Golden Gate campus, was recently named NatureBridge's new Director of Equity, Inclusion & Diversity. We sat down with Miho to talk about equity, inclusion and diversity work at NatureBridge and learned how Miho's past is indelibly connected to EI&D work.

A Year of Firsts

The 2022 Armstrong Scholars embarked on an excursion filled with unexpected challenges including illness, wildfires, rain and more but remained resilient.