The results are in from NatureBridge Olympic’s 2015 Drift-Card Study! For those unfamiliar with the Drift-Card Study, it involves writing an email address on a 4x6 inch piece of orange plywood, throwing it into the sea, and (if it’s found) seeing who writes you back and where they are from. This activity helps our students better understand the ocean currents in our local marine ecosystem. In 2015 students threw nearly 1,000 biodegradable pieces of plywood into the currents of the Salish Sea and heard back from roughly 100 people patrolling the beach both near and far. Not a bad return rate. That means if you were one of the folks that got to throw a drift card last year, it is likely that a card from your group was found and reported. Some of our farthest-reaching drift-cards traveled to Calvert Island, just North of Vancouver Island (a trek of roughly 400 miles) and to Long Beach Washington, just North of the Oregon/Washington Border (a trek of over 200 miles). Here are the results from individual release sites.

The vast majority of our drift-cards are released from the mouth of the Elwha. In the spring of 2015 most of the drift-cards were found east of the Elwha mouth suggesting that there was a westerly flow. However, five of our cards managed to make it out of the Straight of Juan de Fuca and were found on the outer coast of both Washington and Vancouver Island, Canada. 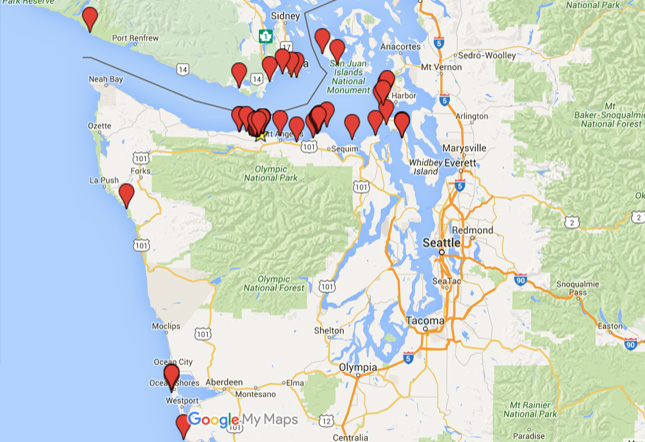 During the summer months, drift-cards released from the Elwha had a similar dispersal pattern as the spring, but with a much farther reach. More cards made it to the outer coast than in the spring and two made it all the way past Vancouver Island to Calvert Island and Hurst Island. The card found at Calvert Island was our farthest traveling card this year traveling a total distance of nearly 400 miles from the mouth of the Elwha. 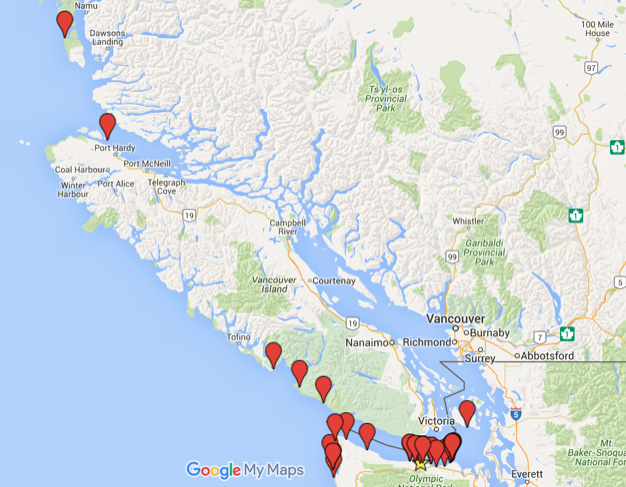 Drift cards released from the mouth of the Elwha in the fall of 2015 had a lower return rate than spring and summer. It is unclear why this is. Of the roughly 150 drift cards that were thrown, only 4 were found and reported back to us. It will be interesting to see if this trend is repeated in the future. Of the cards that were found, they had a similar dispersal pattern to our other Elwha releases. Because of the low return rate, a higher proportion of those found were found on the outer coast than spring and summer. 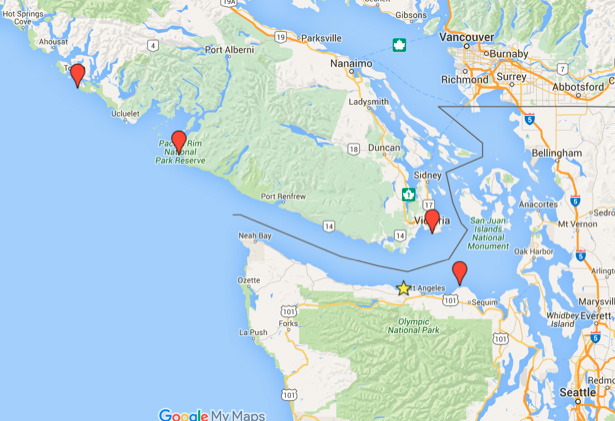 Tongue Point (or Salt Creek), is located less than 10 miles West of the Mouth of the Elwha, consequently one would expect it to have a similar dispersal pattern to the Elwha. This is true except that very few of the cards released from Tongue Point were found on the outer coast. With one exception, all cards released from Salt Creek were found in the Salish Sea, primarily on the North Coast of the Olympic Peninsula. This may be because there is no large river current (like the one that exists at the Elwha) to push the drift cards out into the Straight of Juan de Fuca where they can ride some of the currents that take them West. 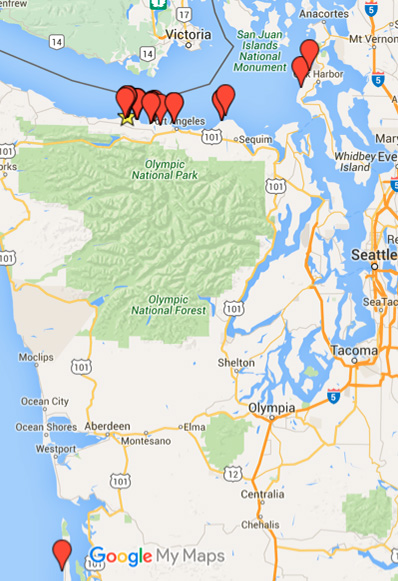 Cape Flattery is a great place to release drift cards. There is great potential for cards released there to catch currents that can really take them places. This is because Cape Flattery is the most northwestern point in the continental United States and because the launch site is on a cliff above the water where you can really get some distance when you throw your card. Because of this, cards launched from Cape Flattery have a history of being found really far away. This year several cards were found on Vancouver Island as well as on the outer coast of Washington. Even the card that was found in the inner Salish Sea traveled nearly 100 miles to land on Whidbey Island at the Naval Air Station. 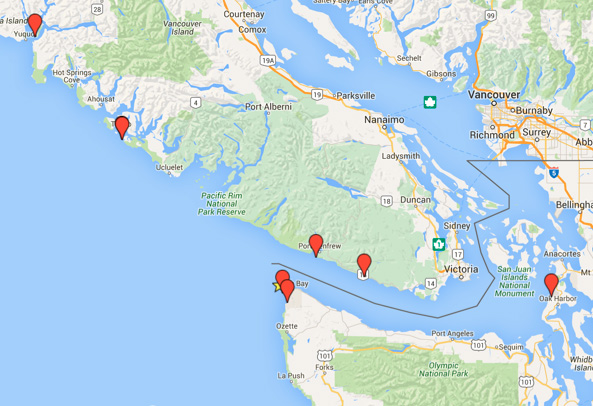 All in all it was a great year for drift cards and hundreds of students got to partake in hands on investigative science. Our data set continues to grow and we are able to help students learn about the dynamic and ever moving nature of our planet’s marine environments.

Environmental Science Olympic
Check out these other

At NatureBridge, we work to increase access to our parks and provide safe, inclusive experiences for all of our students. But is it enough to increase access? Can we guarantee the safety of our black and brown students beyond the confines of our national park classrooms? Can we say, with confidence, that these are your public lands, that you can experience and enjoy them without fear? That in these spaces you will be regarded and treated equitably?

The Case for NatureBridge: A 7th-Grade Perspective

7th graders Jordan and Noah make the case for NatureBridge and why all kids deserve to have experiences in the outdoors.

Less than one year after California wildfires led to the closure of our Southern California campus, Boeing generously granted NatureBridge $120,000 to support environmental science education for Southern California kids at our campus in Yosemite National Park, enabling hundreds of transformative experiences.

Sign up for our monthly newsletter for updates about how we are connecting young people to the wonder and science of the natural world.