The Elwha River. Olympic National Park. NatureBridge. These three things combined to create an opportunity of a lifetime for future stewards and budding scientists.

When I stepped onto NatureBridge’s Olympic campus at 4:30 pm this past Monday, I passed by the Tumble Inn (the educator’s staff and planning office). It was a shock when the educators, straight out of a long day in the field, came tumbling out of the Inn yelling my name. An impromptu welcome and conversation started right there and then—the question: “Do you want to go to the Sol Duc River tomorrow, or would you prefer to head to the Elwha?” That one question, and the decision to accompany students and educators to the Elwha River framed the next 40 hours in Olympic National Park.

Hands-on learning in the River Room

Evergreen Middle School sends its entire 7th grade class (50 students) to NatureBridge annually. These students were divided into three groups. I would accompany 16 students and their two NatureBridge educators Josh and Jenna. Their week focused on the theme “Water is Life.” This lesson is particularly true along the Elwha River, which was dammed over 100 years ago. In 2011–14 it became the largest dam removal project in the history of the world. The students studied the Elwha story in school and were well prepared to experience it first hand.

But before piling onto the school bus for the expedition, the Evergreen students entered the River Room—which included a river/watershed model. This was an opportunity to discuss river flow and sediment travel. Students could witness mass wasting and channel and braiding creation. After inserting “trees and boulders” into the riverbed, they determined the ideal place to build their dream home. They entered observations into their journal and hypothesized about the results of a 100, 500 and 1,000 year flood on property values. The water was released and everyone witnessed in real time, the results.

Students piled onto the bus and travelled to the Elwha. Upon arrival, students paired off. One student bravely volunteered to be blindfolded. Their partner gently and thoughtfully (mostly) led their classmate on a trust walk through a series of natural obstacles until they arrived at a bluff overlooking the river. I expected the experience to end there; it didn’t.

Jenna instructed the blindfolded students to turn their back to the river. Their “sighted” partner then explained what s/he could see and their partner was expected to draw, site unseen, the landscape behind them. Students struggled to share, in appropriate detail, what their eyes took for granted. Some students excelled (see Aidan’s photo below), and others were frustrated with their limitations and anxious to use all their senses again. These exercises gave me greater appreciation for the skillset of the NatureBridge educator. Every minute contained a teachable moment that Jenna and Josh did not let slip by. 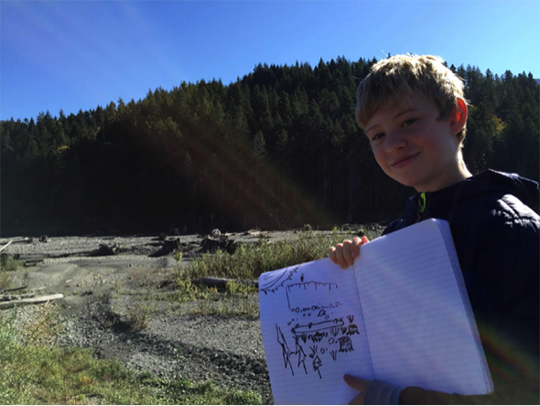 The Elwha, A Living Laboratory

Students recounted, in successive storytelling, the history of the construction, utilization, and the removal of the Elwha dams. Students observed, first-hand, a Chinook (King) Salmon traveling upriver, one of the first to return to the Olympic Mountains to spawn via the Elwha in over 100 years. The Evergreen middle schoolers debated the cultural and economic implications of the dam removal while bearing witness to the stumps of 500 year-old trees that used to line the river.

Jenna and Josh provided bug collecting tools (pooters and beating nets) and requested that the students shake different trees and bushes in order to collect and document insects. They captured their observations in journals and noted the numbers/types of insects found on plants along the Elwha. They were asked to keep their observations intact, so that they could compare the results with their tests in another environment, the Sol Duc Hot Springs, the following day.

Students then divided into pairs to perform research on plant succession. Each team performed a series of tests along a transect from the water’s edge to 50 meters away. Some students utilized a penetrometer to determine soil compaction in the former basin of Lake Aldwell, while others performed water percolation tests, observed light levels, or completed water moisture analysis—collecting data and writing it in their journals.

It was time again to board the bus for a visit to the mouth of the Elwha River. Students reflected on the rebuilding of an estuary, a coastline evolving, and an epic day of learning.

As Josh brought the students back together for final reflections, it was shared that the legacy of the Elwha is hope. Evergreen middle schoolers, like other NatureBridge students, link their curiosity and observations through the practices of science. These students were inspired by their conclusions and intrigued by the further questions raised by the analysis of their data. Their passion for and engagement in the experience provides the first-hand understanding that we are moving towards achieving our mission of sustaining our planet.

My sincere thanks to the educators and staff at NatureBridge’s Olympic National Park campus for your graciousness and hospitality.

To learn more about the history of the Elwha River, check out this National Geographic article.

Impact Stories Olympic
Check out these other

At NatureBridge, we work to increase access to our parks and provide safe, inclusive experiences for all of our students. But is it enough to increase access? Can we guarantee the safety of our black and brown students beyond the confines of our national park classrooms? Can we say, with confidence, that these are your public lands, that you can experience and enjoy them without fear? That in these spaces you will be regarded and treated equitably?

The Case for NatureBridge: A 7th-Grade Perspective

7th graders Jordan and Noah make the case for NatureBridge and why all kids deserve to have experiences in the outdoors.

Less than one year after California wildfires led to the closure of our Southern California campus, Boeing generously granted NatureBridge $120,000 to support environmental science education for Southern California kids at our campus in Yosemite National Park, enabling hundreds of transformative experiences.

Sign up for our monthly newsletter for updates about how we are connecting young people to the wonder and science of the natural world.